Historical sketch of the ISHM by Jean-Pierre TRICOT

Hippocrates can universally be considered not only as the father of medicine, but also as the father of the history of medicine. In his treatise titled "De l’ancienne médecine" (Of Ancient Medicine), he retraces the archaeology of medicine in order to more effectively criticize innovators of the art. In his view, man’s philosophical knowledge is possible only when medicine is properly understood, through the study of causal relationships between the regimen and man. Until the end of the 18th century, ail practitioners of the Healing Art referred to the writings of the Master of Cos.

When experimental medicine made its appearance at the beginning of the l9th century, its first results only ratified the empirical data available at that time. The scientism of 19th century physicians, and historians’ limited field of study, delayed their exploitation of the potential which was present for them, in various directions, to dedicate themselves to the history of medicine.

The first chair in this discipline was established in Paris, in 1795, but, beginning in 1822, it would remain vacant for almost half a Century. It is from 1870 onward, the date on which Charles Daremberg was named the new holder of the position, that one may speak of a hesitant, incipient acknowledgement of interest in the history of medicine, which continued until the eve of the First World War. Several treatises were published. in 1870, the " L’Histoire des Sciences Médicales "(History of Medical Sciences) appeared, which was written by the Parisian author, Charles Daremberg (1817—1872), who had been a student of Littré. The book was quite interesting in its chapters dealing with Greek medicine. Julius Pagel (1851—1912), of the faculty of Berlin, published his text in 1898: "Einführung in die Geschichte der Medizin" (Introduction to the History of Medicine). Later editions were completed by his student, Karl Sudhoff (1853—1938), holder of the tenured chair at Leipzig. During the same period, in Vienna between 1906 and 1911, Max Neuburger (1866—1955) wrote his treatise titled "Geschichte der Medizin" (History of Medicine), following a more philosophical approach. Finally, we note, in the Anglo-American world, the American military doctor Fielding H. Garrison (1870—1935), published "An Introduction to the History of Medicine" in 1913.

Birth of the International Society for the History of Medicine

After 1900, a few national societies for the History of Medicine were organized :

The 23rd section of the 27th International Congress of Medicine, held in London in 1913, was devoted to the History of Medicine. On Tuesday, August 12,1913, a motion was adopted unanimously, jointly signed by, among others, Wellcome, Sudhoff and Wickersheimer, expressing the intention to constitute an "International Federation" of all of these societies, in order to facilitate scientific exchanges and to encourage the study of the History of Medicine.

During that period, Jean-Joseph Tricot, a young Belgian physician born in 1875, was addressing the same project. Having completed his medical studies in Louvain in 1899, he deepened his histological and bacteriological knowledge in Paris during the succeeding years, where he not only met his future spouse, Mademoiselle Royer, but also several French medical historians, during their monthly meeting at the old medical faculty building in Paris. Tricot- Royer began his practice as a doctor of stomatology in Antwerp. On April 2,1914, the four hundredth anniversary of the birth of Andreas Vesalius, Tricot-Royer organized a meeting at the Sorbonne in honor of Vesalius. In October of the same year, he led a Franco-Belgian initiative to establish an international society. This effort was supported by the representatives of numerous countries, including the Frenchmen, Delaunay, Jeanselme, Laignel-Lavastine, Menetrier and Neveu; the Dutchman, De Lint; the German, Sudhoff; the Englishman, Rolleston; and the Spaniard, de Alcalde. But, the project was stymied by the outbreak of the First World War. Tricot-Royer employed these four years to refine his plan, while at the same time extending the study of his country’s medical folklore. Following the end of the war, he assembled his colleagues from the Allied countries and succeeded in organizing, in 1920, the "1st Congress on the History of Healing. "Held at the Antwerp (Belgium) Medical Center, this Congress was very successful. 191 participants came, from 10 different countries, including Turkey and the United States, and presented 61 papers.

Paris, the host city of the 2nd Congress held in 1921, could do no less : 214 delegates from 15 countries attended the birth of the International Society for the History of Medicine, thereby fulfilling the wish expressed by the Dutch medical historian, De Lint: "An International Association for the History of Medicine is created, whose permanent headquarters is in Paris. "Although Sudhoff had actively participated in the preparatory work for such a society before the war, the Germans did not return until 6 years afterward, at the congress of Leiden and Amsterdam of 1927.

The early International Society for the History of Medicine (1921-1938)

Without question, the two leading figures during the early decades of the Society’s existence were its founding President, Professor J.J. Tricot-Royer, who would lead the ISHM until 1930, and who then served as President Emeritus until 1951, the year of his death, and, equally, Mr. Laignel-Lavastine, Professor at the Medical College of Paris, General Secretary from 1921 to 1936, and President from 1946 to 1953. It is evident that, without this Franco-Belgian team, the ISHM would never have come into existence nor lasted until the present.

When one consults the first minutes of meetings held during that era, one realizes that the main goal of the Society’s promoters was not so much the desire to create an international scientific society whose aim would be to assemble the insufficiently numerous scholars specializing in the subject during that period, but, instead, to promote, by all means possible as well as by a policy of attendance, an interest and a current impelling the study of the history of medicine and emphasizing its importance. It follows that, from the moment of its foundation, the ISHM would open its doors 10 professional historians as well as 10 physicians interested in the history of medicine.

One of the Society’s primary tasks has always been to organize biennial international congresses (between 1920 and 1929, the frequency occasionally was annual: 7 congresses were organized within a ten year period). The New World has been represented since the first congress. Nonetheless, ail congresses that were organized between the two world wars were held in Europe. This Eurocentrism was to exercise an influence not only on the subjects being presented in papers but also on the number of countries that would be represented at the congresses.

Between 1938 and 1950, the ISHM’s activities lapsed. The Second World War and the events that followed it prevented all efforts to organize a congress during this period. In principle, a congress should have been held in Berlin in 1940, under the presidency of Professor Diepgen. However, il was not until 1966 that the Federal Republic of Germany succeeded in being the host country, of the 27th International Congress, despite the fact that the study of the history of medicine had been instituted in that country since the beginning of the century.

The 13 congresses following the Second World War were held in Europe, and, moreover, were sometimes held in a city in which they had already been held (Madrid, Rome, Bucharest, London). At the height of the Cold War, the Society’s office made an effort to not forget the countries behind the Iran Curtain (Poland, Romania, Hungary, Bulgaria).

The statutes were modified in 1984 in order to escape the European orbit. To the extent possible, the ISHM’s four Vice-Presidents were intended to come thereafter from different continents. Also beginning with the 1984 Cairo Congress, the English language was adopted as one of the ISHM’s official languages, with the same status as French.

The efforts of the officers and the administrative board were successful. In 1976, Canada welcomed the participants to the 25th Congress and, in 1984, Egypt hosted the 29th. in 1998, the Tunisian city of Carthage was the host for the 36th Congress and the United States begins the second millennium by organizing the 37th congress in Galveston, Texas.

In general, with a few exceptions, the proceedings of the majority of congresses were published. From these hundreds of papers, which perhaps were of uneven value but which mostly were of indisputable interest, an exhaustive and general treatise of the History of Medicine could be distilled.

During its existence, the Society has made several attempts to publish its own review. From the beginning and until 1936, the French review "Aesculape" made its columns available 10 articles written by the members of the ISHM. Between 1936 and 1940, the "Archives Internationales d’Histoire de la Médecine" were published and, between 1954 and 1962, the "Bulletin et Mémoires de la SIHM" Since 1996, a new biannual review has been published: Vesalius, Acta internationalia Historiae Medicinae.

The themes of the Congresses

During the first seven Congresses (Antwerp, 1920 - Oslo, 1928), the organizers did not impose any particular themes on those in attendance at the congresses. Beginning with the Congress of Rome in 1930, specific medical-historical themes were to be addressed by the participants, following agreement with the ISHM office. These themes are listed below, reflecting the fact that, between 1920 and 2000, thirty-seven congresses were held, and that these constituted the principal activity of the Society. The themes are extremely varied, and a trend line of approaches cannot be discerned.

The list of presidents and general secretaries, the true linchpins of the Society, is also shown in the appendix. The merits of the first presidents were perfectly well described in the thumbnail sketches published in 1972 and 1982 by Professor FA. Sondervorst : "Coup d’oeil rétrospectif sur la Société Internationale d’Histoire de la Médecine" (A Retrospective Look Back at the International Society for the History of Medicine).

Five eminent scholars have presided over the progress of the Society during the last quarter of the 20th century.

The Canadian pediatrician, De la Broquerie Fortier (1976-1980) was able to organize the first ISHM congress on the new continent. The history of pediatrics owes him a great deal.

The surgeon, professor and French Director of Health, Jean-Charles Sournia, succeeded him (1980-1984). A Member of the French Academies of Medicine and Surgery, J.C. Sournia is also the prolific author of numerous medical-historical works of the greatest interest. He was able to fundamentally remodel the society’s statutes: the role of national delegates (members of the Board of Directors) was reinforced and English was introduced as one of the official languages.

The German professor, Hans Schadewaldt, served two terms (1984-1992). This medical historian addressed the new global medical-historical situation following the fall of the Iran Curtain. Under his presidency, the ISHM was subjected to intense outside pressures, including the creation of an International Academy of the History of Medicine which no longer exists and the establishment of a European Society for the History of Medicine.

From 1992 to 1996, the Welsh practitioner of General Medicine, John Cule, held the Society’s reins. From 1972 onwards, he dedicated himself entirely to the History of Medicine. His presidency was marked by the admission of the dismantled Soviet Union and Yugoslavia. Also during his presidency, the Society’s new journal began 10 be published in Brussels beginning in 1996.

In 1996, the presidency went to a representative of the New World: Ynez Viole O’Neill (1996-2000), Professor of the History of Medicine at the University of California at Las Angeles. Under her presidency, the Society was 10 experience renewed interest tram the United States, resulting in the Year 2000 Congress. One of the essential points in O’Neill’s program was to achieve a mare generalized teaching of the history of medicine. 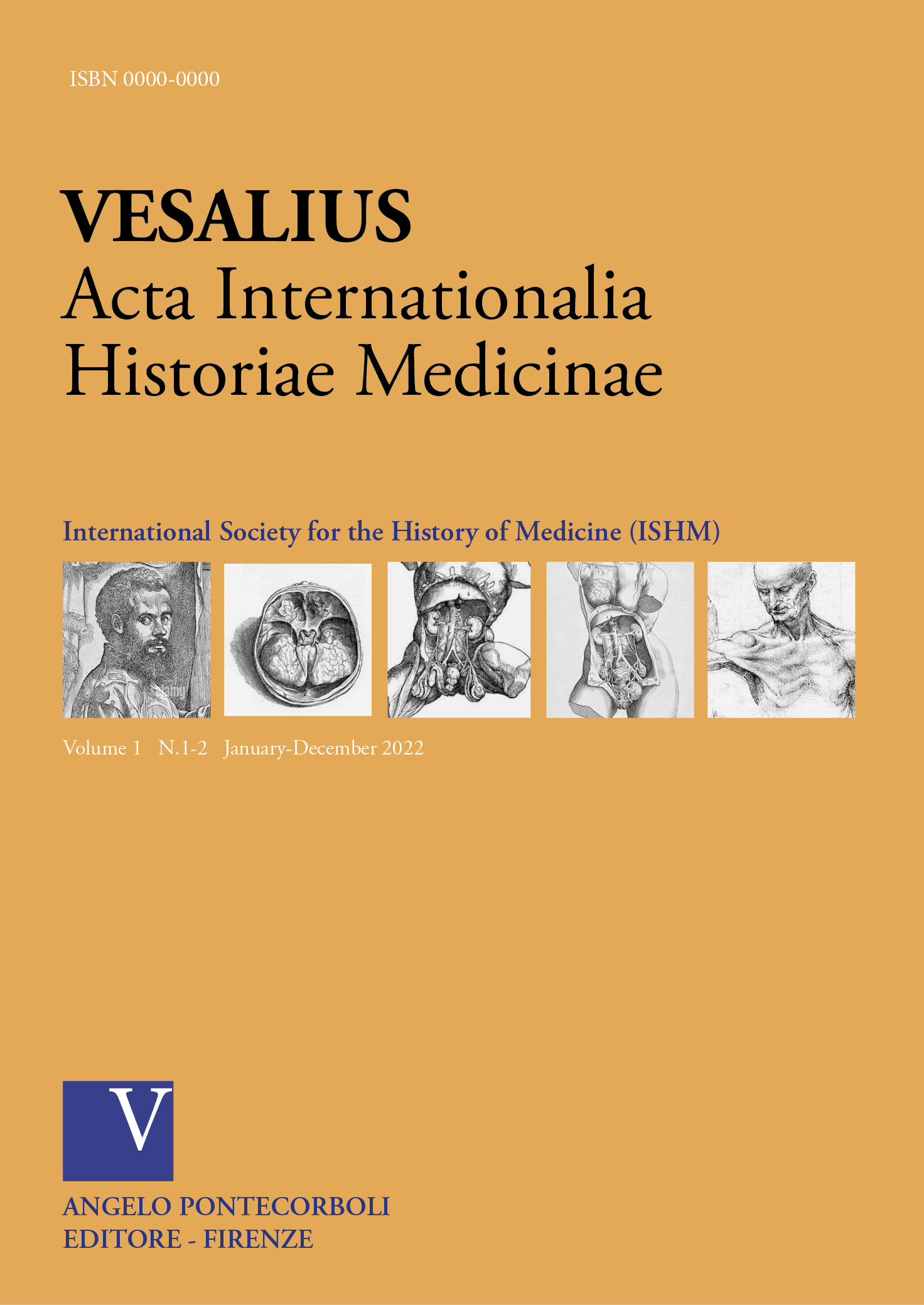 Independent publisher based in Florence (Italy). The Journals and Articles it publishes are concentrated mainly in the areas of Anthropology, History of Medicine, Architecture, Gardens, and Human Sciences.